skip to main | skip to sidebar

i'm not really posting any more recipes here anytime soon.
i AM posting new comics on a wordpress site: http://thefivesecondrule.wordpress.com/. i haven't set up the archives and about and all that, but i am posting comics there. also, on facebook. also, there are three minicomics/zines you could buy if you wanted to. or trade.

if you are looking for good recipes, i highly recommend this: http://coconutandquinoa.wordpress.com/. amy chaplin is a friend and coworker, she's an awesome chef. today i ate a piece of german chocolate cake she made. it was delicious.
Posted by carmichael at 10:36 PM 2 comments: 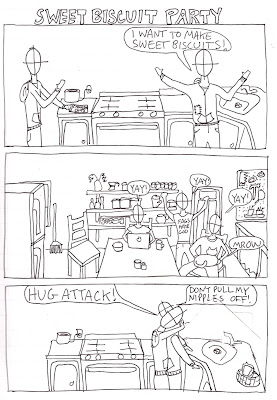 this would be the same as the biscuits below, with about 1/4 cup of sugar added. then we put raspberry jam on them.
Posted by carmichael at 7:58 AM No comments: 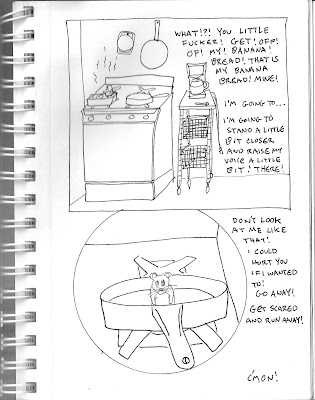 this recipe is adapted from the new farm vegetarian cookbook. meaning, it's almost the same recipe, but i made it a little better:

cream together:
1/3 cup earth balance
1/2 cup dry sweetener (i'll use florida crystals, but if you have maple sugar, it would be better to use that.)

then beat into the sugar mixture:
2 overripe bananas.
(did you know monkeys peel bananas from the bottom? i'm not 100% sure that's true, but try it, it's doable)

add the milk to the bananas and whatnot, then pour all the liquid whatnot mixture into the dry mixture.

then bake for longer than you think necessary. the best banana bread i've had was when i forgot i was making banana bread and i didn't get impatient and take it out too early. give it a good hour at 350. yum.
Posted by carmichael at 7:24 AM 1 comment: 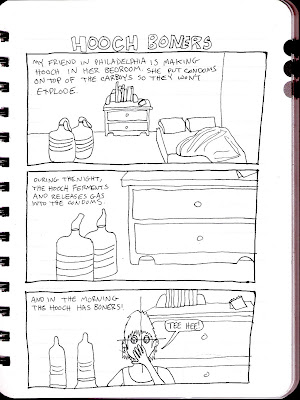 this is what kate is doing?
i am meanwhile making sourdough. apparently it needs to rise for twelve hours twice. i decided to bake it early so i could go to sleep: this is not advisable.

Posted by carmichael at 10:37 PM No comments:

my mornings were like this for awhile, it was pretty rad. now i draw comics about how rad it was. 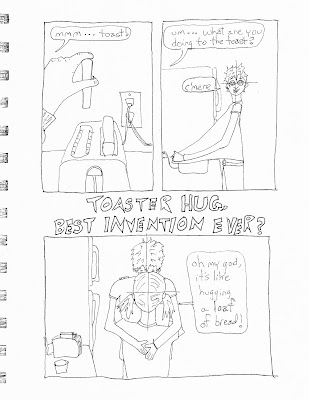 so... right now i'm trying to get sourdough right.
i apologize, my camera doesn't work very well, but really sourdough starter isn't much to look at in the first place. my facebook friend john told me to use pineapple juice instead of water if i wanted to make a wild fermentation sourdough starter. so i'm trying that, and i'm trying to keep alive a sourdough from angelica kitchen. so...we'll see. it seems that everyone has a different opinion on how sourdough should be made, but i feel like it's one of those things that nearly everyone (in geographically applicable regions) could do a few hundred years ago, but fewer and fewer people know how to do today....like, say, carrying around a cup instead of using disposable cups. why forget something that was working so well? i'm obnoxious. but only when i'm writing. i'd love to keep this sourdough alive and then make easy breads and pancakes with it whenever i feel like it. that's the plan. but i've had a lot of experience with killing sourdough starters. hm.

Posted by carmichael at 4:27 PM No comments: 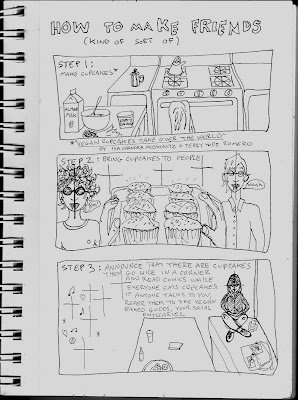 my roommate shawn made these biscuits and shared them one saturday morning. They were fluffy and soft and perfectly flavored. and it was a fluffy soft and perfectly flavored day. i put raspberry jam on mine despite its perfection….because we also had perfect jam, homemade by the mother of another one of my roommates. woah, i’m lucky to know these people. anyway, i demanded the recipe, which shawn wrote down for me. a week later i made the biscuits and they were terrible!!!!! i don’t know what happened, i don’t remember very well. but the point is, despite years of cooking experience and a “chef’s training certificate,” i can’t follow directions or do anything right until i’ve already had some coffee. addiction is bad, because it can ruin your biscuits. the second time i made these biscuits, i also ruined them. but now i’ve made them several times and can say this recipe is solid. it is important to sour the milk, and it is important to mash the fat into the flour before adding the milk. it is also important not to forget you are baking and leave the room for too long. and it is important to wash the dishes so your roommates won’t hate you.

pour the non-dairy milk into the flour/fat mixture, mix it until all the flour is absorbed. the batter should be thick and fluffy, remarkably like wet biscuits. if the flour isn’t totally absorbed by the dough, add a little more non-dairy milk.

spoon the biscuits onto a baking tray. it can make 10-12 medium-sized biscuits. bake for 12 minutes. rejoice. make some gravy.

vinegar: i usually use cider vinegar as my all-purpose vinegar. you can make cider vinegar by yourself if you leave cider out on your counter long enough.
flour: i’m into ½ cup whole wheat pastry flour plus 1 ½ cup white pastry flour, but you know, use what you got. 100% white flour will result in fluffy white clouds. 100% whole wheat flour will result in healthier but heavy biscuits. my roommate uses spelt flour. it also works, i think it tasted better actually.
baking powder: not baking soda. pay attention, carmichael.
nutritional yeast: i think it makes them a little heartier and more interesting, but if you want fluffy white clouds, omit it.
cut: you could use a pastry cutter or two knives. i used a fork and just squashed the earth balance into the flour until the fat was evenly distributed in pieces the size of pebbles.
earth balance: it’s just yummy. sometimes i use some coconut oil (it helps if you want fluffy white cloud biscuits). a liquid oil won’t work as well, but you can chill olive oil until it’s solid, and keep all the ingredients cold until you pop them in the oven.
Posted by carmichael at 2:06 PM No comments:

down with whole foods!

hey, is anyone out there subscribed to this blog?
is there any reason i should start writing in it again?

you should read this article about how much whole foods sucks:

Labels: hippie shit, not about food

Two very important questions with regard to popcorn:

1.) What do you put on your popcorn?
a.) I prefer nutritional yeast and garlic (of course), but have had equally spectacular results with chili powder. I know that a certain someone on this blog favors curry powder.

2.) Are there other grains and seeds that pop like popcorn? If I wanted to pop wheat berries, what would happen. Vegan hedonists, PLEASE ADVISE!
Posted by Kate at 11:58 PM 7 comments:

It's CSA season, and that means more vegetables every week than can reasonably be consumed. Last week (and don't ask me how we're getting root vegetables in July), it was beets. The solution? Lacto-fermentation!

It's pretty straightforward, and the results taste like tart, savory, spreadable borscht.

1.) Finely grate two beets.
2.) In a small, wide mouthed jar (I used a jam jar), alternate layers of roughly 3 loose tablespoons of beets, a dash of salt, and whatever seasonings you like. I used scallions, chopped garlic, and dill seeds. You might want to try caraway, bits of onion, or juniper berries.
3.) If you want to give the fermentation a head start, drop in a piece of kimchi or another fermented vegetable containing live cultures. Use a clean utensil to mash the ingredients together a bit.
4.) Set the lid loosely on top of the jar, and leave the jar out for about two days. Press down the beets every day with a clean fork to ensure the solid material is below the brine.
5.) After two days, give it a sniff and a taste. If you'd like it to be more tart, leave it out for a few more days. If you like it as it is, stick it in the fridge.
6.) Serve as a vivid red garnish on sandwiches and soups, as a topping for crackers, or blend with silken tofu or Better Than Cream Cheese for a creamy spread.